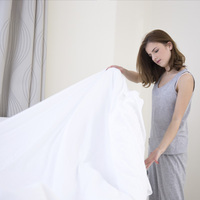 Typically, a duvet cover is meant to be filled with a comforter (duvet) that is a plus or minus two inches in both dimensions. Therefore, for a snugger fit, we advise you purchase a comforter that is bigger than the duvet cover by two inches in both dimensions. Duvet covers are meant to be washed and will experience fabric shrinkage. So even if your duvet cover measures the same as your comforter, it will likely shrink 3-5% and fit more snugly over your comforter. Your comforter will also likely shrink 3-5% when washed. It most likely contains cotton (most do) to be classed as 'down proof' to keep fill inside. Of course other materials can be used inside – but 95% of all down comforters use a cotton fabric or a blend of cotton.

Normally, duvet covers feature a closing method of buttons, and in some cases zippers or ties. Duvet covers may also feature internal pieces of fabric called ties. These ties are meant to be tied to a loop on the comforter, if available. Most comforters you see in stores do not have corner loops; exceptions would be hotel style comforters for hotels and fine linen stores. If you do not have a comforter with corner loops, or a duvet with ties, there's no need to worry, the friction of the comforter fabric and the duvet cover fabric will help keep the comforter adequately in place (with perhaps the need for a weekly adjustment). One exception would be if the duvet cover fabric is silky. This will cause less friction and allow the comforter to move more freely (which could also be adjusted as needed).

Whether you have owned the comforter or the duvet cover first it can sometimes be hard to know if the duvet cover will fit properly onto a comforter. Many catalogs sell bedding but may not explicitly state the size of the duvet cover. We have created this size guide to help you with common cover sizes (current as of 2010) from popular decorative catalogs*:

*Please note most of the major bedding catalogs like The Company Store, Cuddledown, and Linen Source will have a good selection of comforters to fill these duvet cover sizes. Although you should double check with the bedding catalog; call and ask for confirmation of their exact cover dimensions before you buy. (The listings above are just a sample guide, and subject to change.)

One final note: stores will often sell promotional comforters which are typically smaller in size, but may fit your duvet filler needs. Stores will also sell a comforter marked as Full/Queen but can range 88 x 88 to 90 x 98 (what we refer to as an oversized queen). The best source to confirm a comforter's size: the law label.